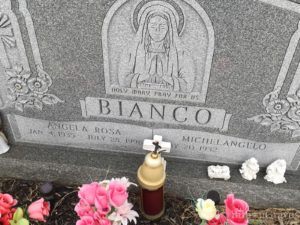 I am the opposite of someone who is crippled by anxiety. When I am anxious about something, I race toward it, sometimes heedlessly, sometimes without proper caution. The drive is one of impatience; positively, this trait could be perceived as bravery, but, realistically, I'll admit to being impatient.

Because I had two young, working parents, my grandmother, Angela, raised me. She was my everything. She nuzzled me into her bosom, singing Italian songs to me, while feeding me grapes. Each morning, Nanny, as I called her, would make me a teeny tiny cup of coffee — in a teeny tiny, caramel-colored mug with "CAFFÈ" in bold chocolate-colored font written on it — and toast with butter. The bread was homemade.

Every year, as the summer began to fade, my grandfather would bring home a truck full of bushels of tomatoes. For an entire day, from sunrise to sunset, I would stand by my grandmother's side, washing, peeling, and stewing tomatoes, before running them through the "sauce machine," as I called it, before we canned the sauce in mason jars with basil leaves plucked from her garden. Then we boiled the jars in a barrel over a roaring fire outside, as the sun went down, and the smoke from the fire was punctuated by the awakening of the fireflies at dusk.

My grandmother died of colon cancer. And that destroyed me.

My parents decided to divorce but remained living together in secret — a crazy-making family secret between my parents, me, and my two younger brothers — until my grandmother died. She was the matriarch of the family. Everyone knows that you do not provoke the ire or wrath of the Italian matriarch. (Whatzzamatawithchu?!) The divorce would be made public to the family at large, my parents told me and my brothers, after Nanny died.

I hated living in that house. I didn't want Nanny to die, but I wanted the secret— and the lie — to end.

The trauma from those years, of watching my strong and brilliant grandmother physically, emotionally and spiritually decline, consumed by the cancer, has rendered my memory full of blank spaces, gaps where memories should be.

After the cancer re-emerged for the third time, my Nanny had had enough. She gave me her gold necklace, a chain of golden links made in Italy, and said "I'm going to die, and I want you to have this."

For some reason, I misremember the year she died: in my mind, she died when I was eleven.

She actually died when I was fifteen.

I think I equate her death with that younger age because it was around that time that she was first diagnosed with colon cancer. I was eleven when our lives changed.

After her first surgery, over 10 hours worth of carving and scraping the disease out of her body, coupled with the chemo, there was no more bread making, or pasta making, or pizza making, or holding me tightly, fiercely in her arms.

For the first time, I felt vulnerable.

No one has ever loved me like my grandmother: Her love was all-encompassing, without qualification. It was boundless. It made me feel invincible. She protected me from everything: When my grandfather kicked me one time when I was four, I ran under her dress and hid between her legs. Her body kept me safe. When my mother would criticize my eating, my grandmother would scold her and then cut me another huge slice of fresh mozzarella.

I have been terrified of colon cancer for over 25 years.

Until today. Today, for the first time at the age of 38, I got a colonoscopy.

When the doctor told me that my colon checked out just fine, and that I am fine, tears of relief streamed down my face..

I had been experiencing intestinal issues for a handful of years. Three years ago, I tested positively for the gene associated with colon cancer. But for the past couple of years, I had deterrents: a former partner who told me that I was "paranoid" for wanting a colonoscopy and that we'd  go broke if I were to seek medical attention. And then I had a primary care doctor — a woman — dismiss my request to get a colonoscopy, given my family history and symptoms.

A month ago, I switched to a male doctor, who listened to me. He sent along a referral to a specialist and three weeks later I was scheduled for a colonoscopy.

More importantly, I have a new partner who fully supports me taking care of myself. She encouraged me to take care of my health. She read all the preparation material and prepared for the exam with me. She drove me to and from the hospital. She has cared for me, selflessly, throughout this entire process.

For the first time since my grandmother died, I feel fully loved. My partner's love has given me the strength to face my fears, head on, because I know she is completely by my side, and I have faith in her and her strength and love.

I think — no, I know — my grandmother would've loved her, too.