Lesbians have been given a gift — a film by us, starring us, and for us. Clea DuVall's Happiest Season feels so necessary at a time of intersecting crises. And, I cannot express the absolute joy I felt upon seeing Kristen Stewart play a lesbian in a lesbian movie — a lesbian Christmas movie! Seeing her in this role itself feels like a win. Also a win is having a joyful film, even though a major dramatic element is Harper (played by Mackenzie Davis) figuring out how to come out to her parents during the holidays, a pressure exacerbated by her girlfriend (Stewart's Abby) accompanying her home. 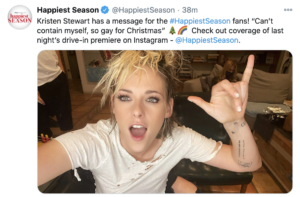 The acting was the highlight, for me, of this film. Stewart has some comedic chops — I can't get the scene of her falling onto an inflatable snowman out of my mind. Her dynamism with Dan Levy (who plays her gay friend, John) and Aubrey Plaza (who plays Harper's first girlfriend, Riley) were electric. Seriously, she and Levy need to play a Big Gay Duo in another film. Also, I would like her (or me) to make out with Plaza.

The film's shortcomings, I think, are a result of the generic framing. How to produce a coming out story within the framework of a joyful, holiday comedy? This tension culminates in the climactic coming out scene as well as the denouement. For me, the pace of the generic drive compromises the integrity of both points — they end up feeling too condensed, too smoothed over, and too easy. Victor Garber, who plays Harper's dad, seems to swallow his conservative views overnight, while Harper's mother (Mary Steenburgen), a tightly wound perfectionist who worries about what the world thinks about her and her family, remains silent, appearing to be passively accepting.

I can't fault the filmmakers (the behind the scenes folx) for maintaining the pace in order to give us a happy holiday ending. But, for me, the consequence was that I spent the final 25+ minutes asking questions. (One of my biggest question concerns Abby and Harper's relationship: On screen, Abby has her deepest, most vulnerable conversations with John and Riley — not Harper. So, I'm not entirely sold on their relationship.)

Despite these few flaws, Happiest Season delivers for the audience and especially for lesbians. I look forward to watching this film every holiday season. Thank you, Clea DuVall, for giving us this gift.