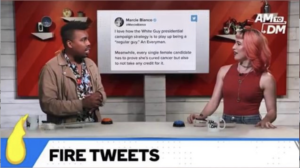 I'm tickled to have had a "fire tweet" on Buzzfeed's AM/DM — a simple tweet calling out the sexist double standards of the presidential candidate coverage and public perception.

The 52K+ people who have liked this tweet fully understand that the political arena — from media coverage to $$ — has not made the space for female candidates to *win.*

Heavily reliant on media coverage and money, the electoral system, in short, is stacked against women. I've been trying to think of a metaphor that would make this fact resonate — for some reason, the recurring image in my mind is of two kittens. One kitten (let's call her Liz) is trapped in a box, another (let's call him Bernie) roams freely. When an "oval"-shaped bowl of tender morsels is set out, Bernie, unshackled and unrestrained, is going to be able to get to that yummy food. Little Liz won't make it to the oval at all, no matter how much we encourage her to "run!" and "get it!"

Here's my second point: It is absolutely gobsmacking that Democratic men are running in the 2020 election. Period. Why? It's unfathomable to me that — for example — a Young White Guy who lost a Senate bid (but became a media darling in the process) looked at the deep field of female candidates — who combined have decades of experience, especially at the federal level, and with incredibly progressive policies — then looked at himself in the mirror and thought Yeah, I should definitely run.

The male ego is amazing.

I hold the same feelings for all the men—the senator with one foot in the grave (sorry, it's the nicest thing I can say about him. #HillaryIsMyPresident); the former vice president who is just as old and can't even fucking take any responsibility for what happened to Anita Hill; the 37-year-old mayor of a small city.

Don't pretend for one minute that their respective candidacies aren't driven by narcissism. These men are smart. They claim they are progressive and "support" women.

If they really "support" women, how can they make the decision to run against all these brilliant and highly-qualified female candidates knowing full well that the system is set against women? That if these men run, they are slamming the door on these women's chances? Has a single male candidate acknowledged this fact—the fact of the historical systemic discrimination against women in politics?

Women need the space to not only run but win. The all-expansive egos of the male candidates, however, will not consider the ramifications of their decision to run for the presidency.