The below is an excerpt from my paper delivered at the Bette Davis Conference on Oct 5, 2018, at Northwestern University: 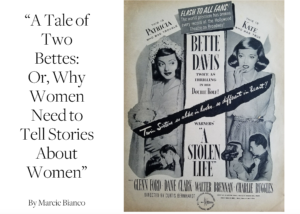 “No one understood my dreams the way she did. She had been with me as I matured from a young girl to a young woman, and she had witnessed me imagine the future I was claiming now. She wanted all of it for me, even more than I could imagine.”

One would never guess that these words are about Bette Davis, who, in our cultural imagination, has not been canonized as a sympathetic mentor to other women, but as a cold-hearted, calculating “bitch” who “feuded” with them all.

When I read these words in Kathryn Sermak’s 2017 memoir, Miss D & Me: Life with the Invincible Bette Davis, I was struck by how markedly different this portrait of Davis was in comparison to other accounts of her life. Miss D & Me is a sentimental education, a tale of feminist mentorship and friendship. From how to deliver a firm handshake, to how to deal with men in a professional setting when you’re the only woman in the room, Davis, she writes, “shaped my sense of what was right and proper, [and] the moment that something was amiss, [s]he was the one who gave me the language to describe it, the manner to endure it, and the grace to leave it at the exact moment before it all went too far.”

As a feminist, I register the difference in terms of gender: Sermak is one of five women to write a book about Bette Davis, and she’s the only woman to have written one from the vantage point of being Davis’ closest friend.

This gender difference is one of significant cultural relevance today: Who gets to tell stories matters. And whoever controls the narrative is the one in power. This means that we must think critically not only about which stories biographers choose to tell, but about the subjective and ideological standpoints of the biographers themselves.

Through a feminist lens that interrogates the idea of objectivity as well as the inherent assumption that a male perspective embodies it, we can reveal the implicit biases that have shaped the stories written about Bette Davis.

When women tell the stories of women we are often surprised by how these depictions transcend stereotype. Women writing about women is one way, to invoke Barbara Johnson’s argument in The Feminist Difference, that women can face each other in order to “eradicate[e] the misogyny that remains within feminists, and … escape the logic of heterosexuality” that maintains women’s subjugation. I want to map this feminist politics of reading onto a Venn diagram that illustrates how women and their stories have been historically read, written, and received. These circles represent the “male gaze” and the “male glance.” Both the male gaze and the male glance are patriarchal in scope; both objectify women in different ways: from sexualized trophy to fetishized idol. Neither way of seeing is exclusive to men—we know that women living under the influence of patriarchy can be misogynist, too.