That is, "boring meets torrid."

Credit for this magnificent term goes to USC’s Karen Tongson, who coined the word to describe the particular genre of lesbianish cinema, made for mainstream/straight consumption, which play out "long-simmering romances that are in many respects about repression and sidelong glances, the indirectness of desire."

Tongson's commentary was directed not only at Francis Lee's Ammonite, starring Kate Winslet and Saoirse Ronan as fossil-crossed lovers, but the abundance of recent mainstream lesbianish films which, suggestively, are all period pieces that feature white women. (Because lesbianism is the safest when it is white and FAR AWAY in the past.)

Frankly, I cannot get “borrid” out of my head. I cackled when I first read it, because it not only perfectly encapsulates the genre but also the storyline of Ammonite. And, what is Ammonite about? For me, an ex-academic who during my student-salad days took immense pleasure in my heady crushes on my professors, whose mannish lesbian mentors I admired for putting their work first above all else, this film is all about the fossilized heart of a stone butch. The drama unfolds when that butch, who has always found comfort and refuge in her work, trepidaciously journeys into the lady pond of heartbreak and face-sitting, sandwich-lovemaking. This is, of course, despite the heartbreak she has suffered once before, courtesy of a dashing Fiona Shaw (who is very seductive with all her potions and balms ... for rubbing). But this is what wide-eyed admiration from Saoirse Ronan will do to you. 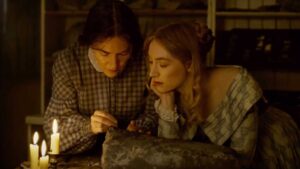 Listen, my reading of the film is absolutely informed by my current well-being. And, deep into this pandemic and trapped in my apartment in the middle of Nowhere, California, for months on end, my current well-being is depressed. Like, totally hopeless. Like, what’s the point of anything?

That’s where I’m at. So, watching a beautifully rendered film (the cinematography and sound and editing and acting are all really fantastic) about a poor stone butch paleontologist who opened her heart one time to Fiona Shaw and got blasted only to fall for a nymph-like straight-married Saoirse Ronan who largely falls in love with Kate Winslet because of the quality of her work … well, let's just say, been there, done that. The academically-dapper (which in actuality is quite distinct from dapper) butch whose heart is SO! VULNERABLE! and who prefers flirtation "in good fun" (preferably in relation to an MLA panel you'll both be on, or an article you're co-authoring, or in the email exchanges about the research you're doing for her (she's too busy for that!)) to anything substantive ... because her work! And, if she opens herself to you, WHAT WILL HAPPEN TO HER? (Or, worse, to you?) There is sadism and masochism on all sides.

The final scene of Ammonite leaves us with Kate and Saoirse (yes, I know they are playing characters but who cares?) gazing at each other, separated by Kate’s work, which is encased in a glass showcase at the British Museum and is attributed to SOME MAN (which is representative of how Kate's work has been stolen by men; her name erased). A very smart friend of mine reads this scene optimistically, as exhibited by the fact that they are looking at each other; the work that brought them together brings them together once more. There is potential, my very smart friend says, that they will rekindle their romance.

But depressed me reads it oppositely: Kate and Saoirse are separated by the work, and (the glass proves that) this is quite clearly, physically, the case. The work will always come first. And, really, in Kate's case, can you blame her? I mean, one can only eat so many sandwiches before they want something else. And now that her mom is dead and not coughing blood all over her wares (COVID! COVID!), she can really make her tiny house a real home. Maybe even invite Fiona Shaw back and ask her to bring more balms.

This is all to say that if you’re in academia or academia adjacent or have fallen in love with a stubborn, butch Taurus or have been distracted from your-very-important-work-that-really-no-one-will-read-in-the-end, then Ammonite is for you.

The above is intended to illustrate that there is no such thing as objectivity. No perspective is "objective" — it can be articulated from a vantage point of "critical distance," but it is still very much subjective. Language itself is subjective — it is made in society; we choose it (hopefully, deliberately) when we use it. This is all to say that the "gatekeepers of culture" are those who reflect established social values, not necessarily emergent or queer or marginalized ones. The gatekeepers, of course, refer to their shoring up of these values as examples of "objective" truth telling (even facticity). But this is not the case.